Uber seeks to raise about $9 billion in cash in its initial public offering next month when it is expected to debut on the New York Stock Exchange under the symbol “UBER.”

The company plans to offer 180 million shares at $44 to $50 per share, according to an updated filing released Friday morning, valuing the company between $80.53 billion and $91.51 billion on a fully diluted basis. The valuation is well below earlier reports that suggested Uber could be valued as high as $120 billion. At the low end of its price range, Uber’s market cap would be $73.7 billion, which would even fall below its last private valuation of about $76 billion.

Even at the lower end of its pricing, Uber will still be the largest tech IPO to debut this year. The company may have scaled back expectations after seeing excitement around its rival Lyft’s stock quickly fizzle out. The stock, which has a market cap of about $16 billion, is down more than 27% for the quarter since debuting in late March.

Still, Uber’s IPO is set to make its top shareholders worth billions. Assuming Uber prices at $47 per share, the midpoint of its stated range, SoftBank stands to gain the most from the IPO. Based on its post-IPO share count in the filing, the firm would earn more than $10 billion in the offering. Even Uber’s ousted former CEO and co-founder Travis Kalanick stands to gain $5.3 billion in the IPO, based on the same assumptions. His co-founder, Garrett Camp, stands to gain about $3.7 billion through LLCs he manages, under these assumptions.

Here’s where each major shareholder will stand after the public offering, based on their post-IPO share counts and assuming Uber prices at the midpoint of its stated range at $47 per share: 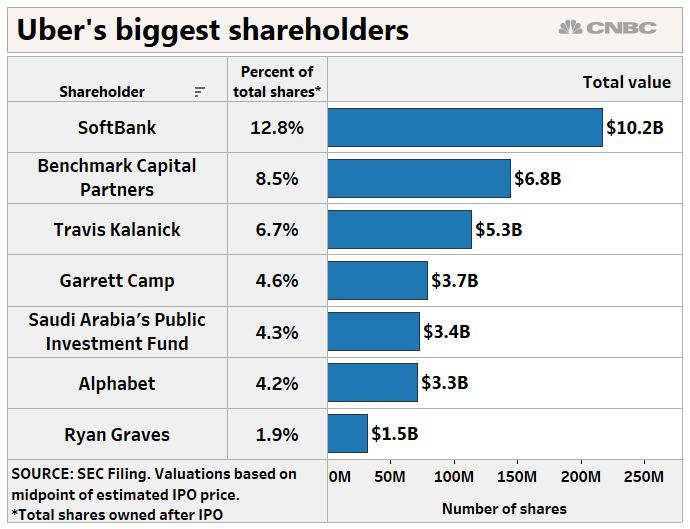 This article was culled from here